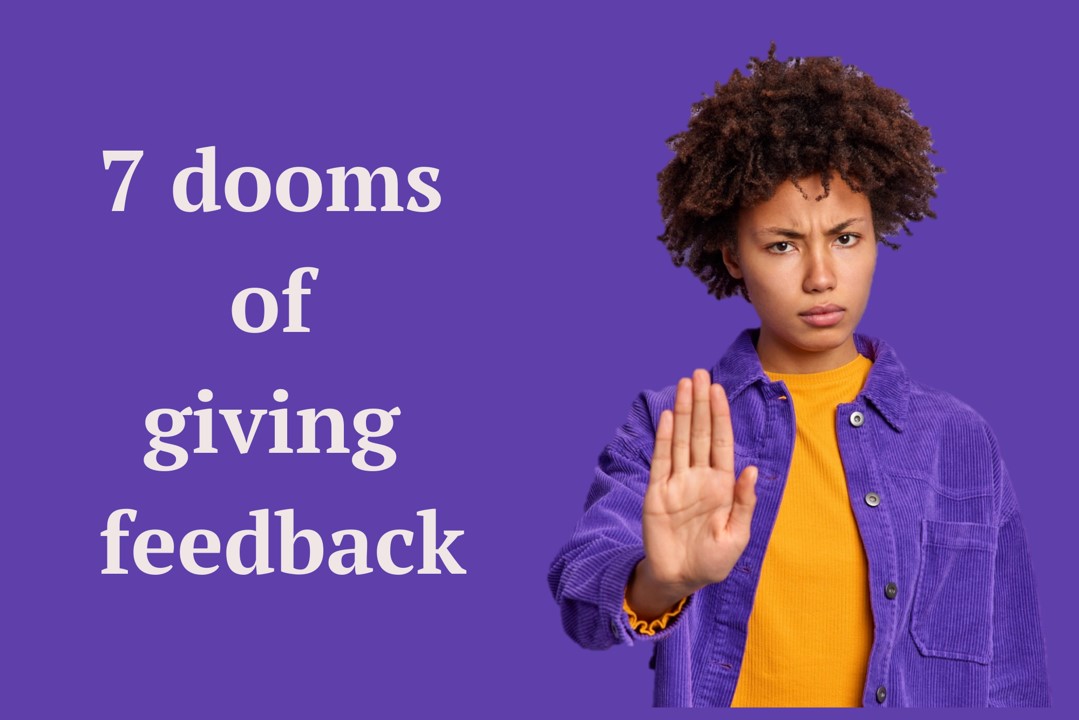 Feedback has been a long-debated issue. Some people are of the opinion that feedback does not give the expected outcome, rather it breeds strife and could be counterproductive. Others believe that feedback is necessary for growth, at both personal and organizational levels.

Today, business leaders and managers have been encouraged to praise and reprimand openly. Candor, openness, and frankness have been promoted across units, teams, and departments. But has feedback helped as much? For instance, studies showed that more than half of your rating of someone reflects your characteristics, not theirs.

Feedback means different things to different people. In this discourse, it means telling people what you think about their performance and how you think they can be better. ‘Recipient’ as used in this article refers to the person on the receiving end. We will discuss the pitfalls in giving feedback and suggestions for effective delivery of feedback.

Have you ever given a feedback before, and you felt bad afterwards? Well, it can go wrong if not given effectively. Here, we highlighted some of the reasons why feedback can go wrong.

Should we give feedback all the time? Not necessarily. Research shows that it shouldn’t be given all the time. It’s not a one-size-fits-all mechanism. Some people who want feedback on specific areas may not welcome feedback on other ‘sensitive’ areas. It is important to know what type of feedback a boss, co-worker or an office assistance welcomes.

For instance, it’s inappropriate to give feedback on how a colleague should talk to their fiancé when you are aware that they are discreet about family issues. In another example, a new hire (associate) may prefer positive feedback on how he is gathering stakeholder requirements for a client organization. As they move higher (say senior manager), they may crave constructive feedback on how they manage people.

When giving feedback, people often make generic statements like ‘you need to be more open’, ‘your performance is not good enough’, etc. Statements like these are too generic and could often be misinterpreted. In addition, these statements do not in any way help the receiver of the feedback. Rather the recipient is left confused and in a worse state.

In providing feedback, it is essential to provide specific details about the person’s behavior – what the person did – and the effect or result of such action. For every feedback, use concrete examples that the recipient can recall. For instance, “Hello Jack. Over the last 3 weeks I noticed that your average daily performance target has dropped by about 20%. Yesterday, I saw you made only 2 calls, 8 less of the daily average. We are making less sales this peak period. Could anything be the problem?”

Have you seen someone being shouted at in public? There’s a rule of thumb here: “Praise openly, reprimand privately.” Giving personal feedback in a public environment can do more harm than good. Apart from the recipient feeling embarrassed, they may also take the feedback personally.

To help the recipient, it is important to know their state of mind and when they are most likely to be open to feedback. Catching people unaware only increases their adrenaline, which may impact the effectiveness of the feedback.

Nothing can be truer as the adage ‘Say what you mean; mean what you say.’ Sometimes people hold back on things they are supposed to give feedback on. They would rather say what the recipient wants to hear than what they intend.

Giving feedback does not come easy, especially if it is sincere. One way to be more open about your feedback is to be as honest as possible. And if you feel the recipient may be embarrassed, you may seek other approaches, like putting your feedback in writing.

The goal here is to be candid and open as possible. It’s better not to give feedback than to give dishonest feedback.

Feedback is not a one-way loop. It should not be about you. Not allowing the recipient to provide responses to feedback is as good as not having one. For instance, a manager who keeps complaining that a direct report is not performing without uncovering the cause of low performance by giving the recipient a chance to respond.

In some organizations where command-and-control is the order of the day, it is difficult to make feedback at least two-way (giver-receiver). However, organizations that have successful feedback culture have proven that creating multiple-feedback channels enhances employee growth and development. Feedback from peers, managers, and even juniors go a long way to help you uncover areas of improvement.

It is not enough to give feedback. Documenting feedback is also important. If feedback is not documented, either party may claim ignorance in the future. This is particularly important for formal feedback.

Although this may sound tricky, when giving formal feedback, it is advised to document your feedback for reference purposes. The giver-receiver should both have access to the same documentation. This prevents surprises in the formal appraisal process. For instance, at Harrybaker we use a tool like Laudah which helps employees document their feedback by commenting on specific knowledge, skill and ability linked to a competency.

Some people find it easy to give only certain types of feedback. For instance, so folks gravitate towards giving positive feedback only due to their personality. Giving only positive or negative feedback is not ideal. If, as an example, you only give positive feedback to your colleague, while ignoring their weaknesses, you may end up doing more harm than good.

Whilst you may get the compliments of always giving positive feedback, the recipient may eventually uncover the real issues. The same is also true for negative feedback to dampen people’s morale.

A good way to avoid giving one-sided feedback is to be moderate in both the positive and negative feedback.

Bringing the pieces together on feedback

Whether we like it or not, we give feedback directly or indirectly. Understanding how best to give is essential in today’s knowledge-driven world.

When we give feedback, let us always put ourselves in the recipient’s shoes. How would you feel if the same thing is said to you? How would you react if your colleague provides the same feedback in the same manner?

Go beyond training, enable your workforce to apply the learning.